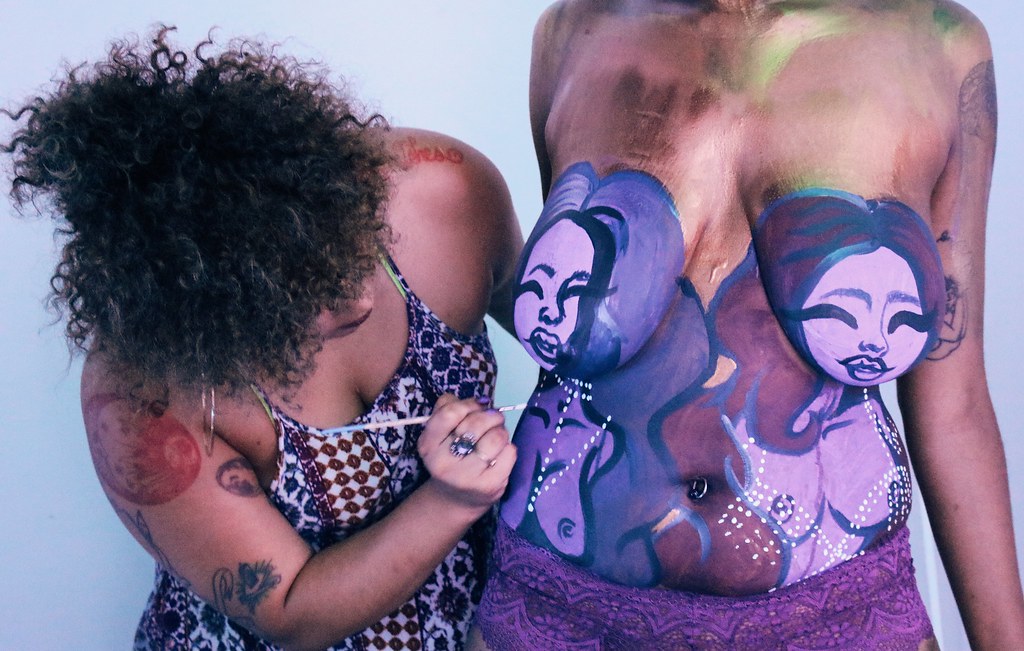 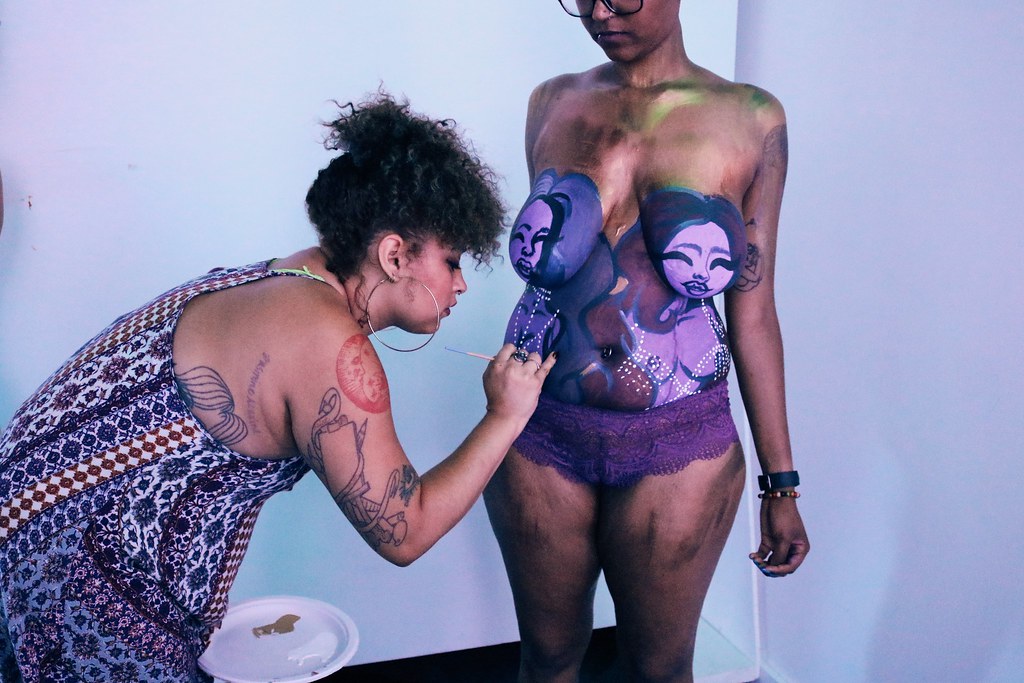 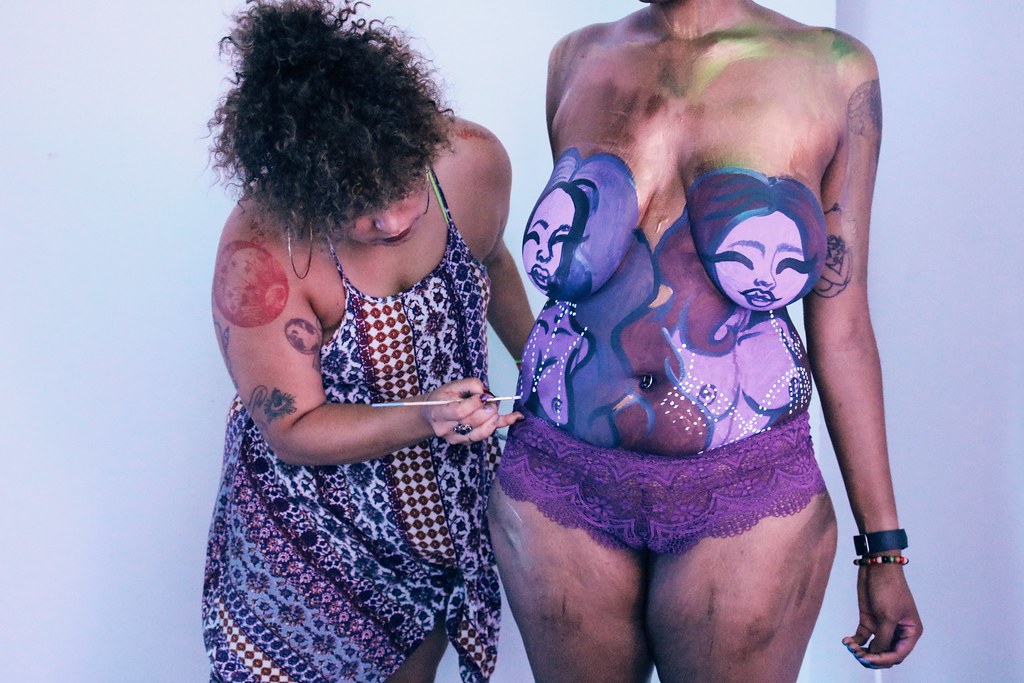 What a night filled with great vibes. many thank you’s to EscapeNYC for allowing me to participate in an event filled with such talent. I body painted live and had such a nice crowd around me. A special thank you to my models and my photographer.

Here are some Behind The Scenes shots of my recent photo shoot with model Jordana and photographer Renee from ReneeMode.com . I love shooting outdoors and I hope I get more opportunities to do so. The sun is the best lighting there is. Jordana was a sweet and super quiet, shyest model I have seen yet!

Renee and I have been discussing for a few months now, a new series we want to work on, but with full schedules, it’s been a bit tough. We considered this our test shoot, to see how we work together and what we want to work on for the next one, and we learned a lot from each other.

I hope you guys enjoys these behind the scenes pics I took of Renee at work, unfortunately I didn’t get any of me at work.. serves me right, I looked like a hot mess anyway!

Today I got to shoot with Renee from ReneeMode.com. As soon as I woke up, the  model was already at my door, eye boogers and all….me, not her! since Renee was running a  bit l ate, I started painting right away, figured she’ll show up right when it was time to shoot. Boy, was I right.

Model Jordana was a quiet, sweetie and her sweetness shined unto these photographs.

Come back a little later for behind the scenes shots lovies. 🙂

Here’s a new Body Art Session , in which I had the pleasure working with model EnticingP , who was a total sweetheart and so easy to work with. Of course, David Zayas Jr. was behind the lens while I painted away. Check out some of my other body art shoots by clicking on “Bodies” under my portfolio. Also, feel free to make some new new friends by clicking people’s names on this post or any of my other posts 🙂

I’ll see you guys soon with another more shoots, especially since David and I went a little crazy with our Open Call the other day.

Later guys, and enjoy this behind the scenes shot:

Working with Photographer David Zayas Jr. and model Slim was incredible. I was in the mood to work with some greens to bring in St. Patty’s Day as festive as I could think of. And what’s more festive than painting some skin? hahaha. Check out this sessions pics, Make a new friend and support their work by clicking on their name, and tell me, which one is your favorite???

Behind the Scenes footage of another successful collaboration with David Zayas Jr, and the coolest chickie Slim.

I’ll be posting the end results in a few. David did a great job editing, while Slim rocked it in front of the camera.

You guys already know I did the body art painting,

Can’t you tell that working with @themtittiesout was sooo much fun? @dzcs4u captured everything perfectly. This is the second batch from our shoot the other day (see that post here). Like I mentioned before, this piece was supposed to be more on the silly side, especially because of the placement. I decided to paint a girl bending over with her feet tucked in under her.

This project was definitely enjoyed and I hope you guys stay tuned for the behind the scenes pictures.

Recently I had the pleasure of working with a good and talented of friend of mine for another time. David Zayas Jr. is a natural behind the camera. The last time we worked together was about 2 years ago with model/mutual friend (see that post here).

I also had the chance to meet pink haired Stephanie, who was the biggest sweatheart imaginable. We bonded while I was painting her “cuca” which we found hilarious, and started to exchange war stories about boyfriends. She mentioned it was her first time meeting David, and she felt extremely comfortable already. I agreed with her right away. I first met David in 2011 and as soon as you meet him, there’s no awkward moments. I told her to have fun and do whatever you want, which she definitely did. 🙂

I ended up doing two different pieces, In this post you’ll only see the one of them. This blue skinned beauty with lime hair was actually the second piece of the bunch. Like always, I never really know what I’m doing and just work with whatever comes to me at the moment. But I do have to admit, at least this time I came in with a rough draft of the pose I wanted, all the colors, details and whatevers  came at the moment.

So, tell me what you guys and gals think…. I know it’s been a while since I’ve put any work up, I’m sooo rusty. (Enough making excuses)

David was great, Stephanie was wonderful and I had sooo much fun. So enjoy this batch for now, and stay tuned for the second batch which I think you guys would enjoy, since it’s meant to be silly and funny…..

I’ll also be posting some behind the scenes shots.

I don’t even know where to start, I guess the beginning will be a good choice but I rather start with the thank you’s.

Thanks  to Matthew Colon, who at last minute gave me the opportunity to work under his co-partner Cass Jones; founder of VIP Skinz ( a body art shop, both temporary and permanent ).

With this call I was given the chance to work behind the scenes at “The House of Roderick’s Pompadour Winter Fashion Show” for 2013’s Fashion Week that was being hosted at the infamous Empire Hotel Rooftop.

I guess now we can start at the beginning. . .

It was a rough morning. A very ” why out of all days is this happening to me” morning.

I headed out my apartment ready for a busy day, with my roller bag that was a little way too loud once it hit concrete, but it would have to do.

Everything fit perfectly and better yet, I didn’t have to struggle carrying anything. Especially since I was coming from Brooklyn.

Little did I know, and of course I happened to notice on the train ….

That horrible smell, I couldn’t stand it, and it was wickedly concentrated. Thanks to my cat, sarcastic as I could ever be… I failed to noticed that Vandal had taken upon himself to mark his territory on my bag.

And I of course only noticed when I was already on the train, looking at the time every chance I got.

I was running late, already on my way, worried and now I have to deal with the embarrassment of this stench. How professional.

Problem No.2 – I’ve never been to the Empire Hotel before, yes I’ve been invited many many times, which mostly was an invitation to wear a too tiny mini skirt, and parade around in heels until I got so drunk I wouldn’t be able to say pronounce my name anymore. I always said no.

I take my phone out to the GPS the directions and today, of course my phone decides not to be activated.
And no, not because I didn’t pay it… But bc I share the plan with irresponsible people who I barely see, let alone speak to.

But that’s a whole other story. No phone. No directions. I head to Columbus Circle because that’s the best my memory lets me get to and ask my way around, asking anybody and everybody where this hotel may be at.

It’s 10:20 am and I only wish I could reverse time by 20 minutes. I swear, I’m always late. I panic and make my way to the rooftop where I was told everyone ( body painters, constructors, models,  and Roderick himself will be. )

Empty. If I was in the wrong place, I was screwed. With no way to contact anybody ( phone less) I asked around while I dragged around my stinky bag.

I met Freddy, the hotel’s engineer for 12 years and very sweet man who assured me I was in the right place. I was just the first to arrive. He offers me a bottle of water from the bar and tells me to just sit and wait.

Before I even do that I hide my bag across the room as far as I possible can. No one needs to be drenched in that.

I meet two ladies who happen to be event coordinators, and ask to borrow their phone. I call Cass at her shop and she assures me she’ll be there in an hour.  At least I’m not the one who’s late. A relief off of my shoulders.

The models arrive and Roderick does shortly after. I offer to help glue rhinestones on his flyers for the time being to keep myself busy and useful while the girls start to rehearse. Once I see two horns appear through the door I head downstairs to help Matt and Cass unpack all the supplies from the car.

I haven’t had the chance to use an airbrush machine and I was eager to get the chance to learn tonight. It doesn’t look too difficult anyway.

There was a lot of time in between actually starting to paint, but once we started I was excited to finally begin.

We started with the 4 men who were to be positioned at the the end of the runway. Painted as roman/Greek statues.

We airbrushed for a little while until the machine broke down and refused to work, which let us to our last minute plan B solution.

We watered down some acrylic paint and some airbrush paint and started to sponge the guys down.  I had some guys screaming at how cold the water was, but all I could do was laugh.  I was titled “the evil one” all night.

When it came to the women the concept was simply this: 12 women, half in real lingerie, the other half in fake lingerie.

That’s where we came in.

We, as in Cass, Matt and I painted stockings, garter belts, corsets, and bras.

It looked, what can I say… I personally think we did really well. Not to mention, that we finished RIGHT on time.

The show was already starting, cocktail hour had begun an hour ago, it was now 9pm and the models needed to be out.

Roderick placed all the jewels on the models and they looked great.
That man really knows jewelry! Hey, that’s what we were all there for.

Karen Gravano from Mob Wives was the guest emcee and the music soon began.

Cass, Matt and I didn’t even have time to go and change… So we did the only thing we could do…

We stripped down and threw on our fancy cocktail attire, all while covered in paint ( good thing I bring baby wipes ) we all got dressed in less than two minutes….

And hey, we’ve been seeing boobs and spreading buttcheeks ( while we painted, pervs! ) all day, so I doubt we made any difference in all that behind the scenes action.
I ran out to catch the best glimpse of the show that I possibly could. After all this hard work, I definitely wanted to enjoy the end result.

Everyone seemed to love it.
Once the dancer, ( Phillip did great ) and the models finished with their walks, it was time for the Crew to walk the runway.
I have never had so many flashes come at me at the same time. I had people screaming ” I’m from _____ magazine, look over here !” Or ” this way, this way_____ press”
It was , how can I say… Exhilarating.

All Photos on this blog, by me.